Greetings from Lake Wabatongushi! It's hard to believe that we only have one month left here at the resort. Wow, where have the days gone? This summer has been absolutely enjoyable. Getting to meet so many people from different parts of the world, and sharing in their excitement of wildlife sightings, catches and releases, and just the contentment of being away from it all has brought joy to my days here at the resort.

I will never forget my first group; the Mancini party. Mr. Mike Mancini, and Mr. John Mackey; two guys from Michigan who came up to relax and catch fish. I won't forget their kindness, and smiles. Although they didn't have as much luck with the fish as they hoped they would have that didn't dampen their spirits.

We had a family from Belgium come to stay with us here at the resort. That was exciting to meet a family from Europe and to share in their experience of the great Canadian wilderness.

Mr. Ron Johnson, what a guy! Ron came up to the resort twice this year to fish and relax. I feel that I learned a lot from Mr. Johnson when it came to catching walleye. His willingness to share his ideas, and fishing tactics were very helpful to me.

The Dewane party. I don't think you could meet a nicer group of ladies. I enjoyed sharing my knowledge of wildlife with them, and also hearing about their catch and release stories during breakfast. Don't forget ladies strawberry kiwi juice is the BEST JUICE EVER!

We had another returning guest this year. It was nice to see Doug Hoppa once again this summer. What an interesting guy Doug is. Not only is Doug an awesome fisherman he also has an awesome voice too. Thank you for the coffeehouse night's, Doug. I don't think I will ever get tired of hearing the Wabatong song :)

To Mike and Sherri Kelley; your kindness and encouragement brightened my days here at the resort. It was a pleasure to meet you both and spend time with you each morning during breakfast.

We have had so many great people come and go this summer. Greetings are always exciting, and goodbyes always sad but the memories last a lifetime.

From Errington's Wilderness Island www.WildernessIsland.com
Posted by vanessa adair at 10:56 No comments: Links to this post

Greetings from Lake Wabatongushi! Here I am once again to tell you about the big fish that have been caught, and released on Lake Wabatong. 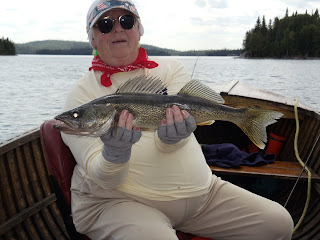 Another great catch and release. Here is a photo of Jill Batchelor and her 24.5 inch walleye. Way to go, Jill! 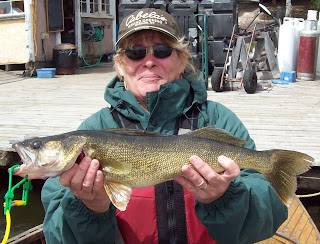 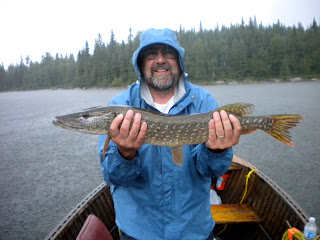 Well that's all I have for you today. I hope that this post finds you well.


From Errington's Wilderness Island www.WildernessIsland.com
Posted by vanessa adair at 13:16 No comments: Links to this post

Greetings from Lake Wabatongushi! Here we are over half way through the month of August with September just around the corner. The past few weeks we've really felt fall creeping in on us. The sun is setting sooner, the mornings are crisp and cool, and the urge to throw extra blankets on my bed at night is becoming more and more a reality. It's always hard to let go of summer, but at the same time you long for the colours and the cool down that Autumn brings.

Another tell tale sign that Autumn is on it's way is the gathering of the fowl. The common loons on Lake Wabatongushi have been gathering together preparing for their journey south. While I was on vacation a few weeks ago I also saw that the Canadian geese have been flocking together to make their journey to warmer places for the winter. Oh, to be a migrating bird.

The black bears are also beginning to prepare for the winter slumber. At this time of year they are goring themselves on Mountain Ash berries,nuts,and fruits. Anything that is edible they will eat to increase their body fat. Once in their slumber the bear will live off of their fat reserves for the winter months.

Before I leave you today I would like to share some pictures with you that Doris took this morning after breakfast. The great blue heron sat at the top of a pine tree not too far from the lodge and provided us with some great photo opportunities. 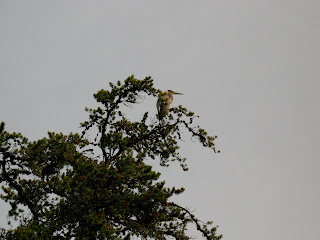 Well that's it for me. Thank you again for taking the time to read our blog. We sure do appreciate it.


From Errington's Wilderness Island www.WildernessIsland.com
Posted by vanessa adair at 10:05 No comments: Links to this post 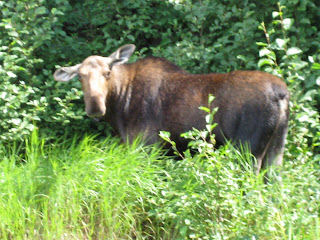 Morgan and I went up to long-time-no-see-um Bay a few days ago because it is our favourite place to see moose.

We were really lucky and saw this large cow moose that was not skittish at all and let us get close enough for Morgan to take some really good pictures and the video below.

Of all the wildlife here I think I like watching the Moose the most.. They are so large and lanky yet totally adapted to our Boreal Forest and the marshes where they live, feed and breed.

This cow Moose does no have a calf. She may have lost it to Bears in the spring.

Mating season is next month and hopefully she meets up with a Bull Moose and has a calf in the spring.

From Errington's Wilderness Island www.WildernessIsland.com
Posted by Unknown at 11:43 No comments: Links to this post

Scenes in the sky

Greetings from Lake Wabatongushi! I would like to apologize to our readers for the absence in web blogs. The past few weeks have been quite busy here at the lodge and unfortunately it has been hard to find the time to sit down and reach out to you. But here I am ready to fill you with great facts and information. Are you ready? I know I sure am.

On August 12th and 13th we had the pleasure of viewing the Perseids meteor shower. The Perseids have been viewed for over 2000 years and are associated with the comet Swift- Tuttle. Starting in mid-July, you can view this natural beauty. The comet's tail ejects particles which in result produces meteors. When the Perseids reaches it's peak, 60 or more meteors can be viewed every hour. On the evening of August 12th, Devon Errington counted upwards to 90 meteors in one hour.

What causes the northern lights?

The northern lights are caused by the emission of Photons in the Earths uppper atmosphere which collide with solar wind and nitrogen and oxygen atoms in the sky. The result? The northern lights. Different atoms produce different colours. For example green or brownish-red lights are produced by the oxygen atoms while red or blue are produced by nitrogen atoms. The most common colours are green,pink, yellow, and pure red.

I lived in Cochenour Ontario ( Red Lake district) for 4 1/2 years and was fortunate enough to have seen some spectacular displays of the lights. My brother and I would head to the sliding hil, and just sit up there staring up at the sky in complete amazement. The lights felt so close you could hear them crackling, and swooshing above our heads. We were surrounded by such natural beauty and entertainment. It was amazing the calming effect the lights had on us. We saw displays of green, blue, and even purple lights while sitting up on Cochenour hill. Those are memories I will forever hold dear.

Have you had the opportunity to view the northern lights? What colours have you seen?

Well that's it for me. Thank you for taking the time to read our blog.


From Errington's Wilderness Island www.WildernessIsland.com
Posted by vanessa adair at 13:37 No comments: Links to this post

Email ThisBlogThis!Share to TwitterShare to FacebookShare to Pinterest
Labels: Night Sky in Canada and Astronomy

We had a late night last night with spectacular skies. It was beautiful and clear for the peak of the Perseids meteor shower. Devin counted 87 Meteors in about an hour and a half, some of them very bright and spectacular. The Milky Way was very distinct and there were so many stars the many of the constellations were indistinct. Jupiter was very bright rising on the eastern horizon. WE are probably going to look at Jupiter's moons with our telescope on tomorrow night because 2 of the moons will be in transition which will be neat to see. We even had a few spikes of northern lights last night although nothing compared to last weeks northern lights. We are just getting into the best northern lights viewing over the next month as the earth will be facing a part of the sun with greater sun spot activity which causes really great northern lights.


From Errington's Wilderness Island www.WildernessIsland.com
Posted by Unknown at 15:51 No comments: Links to this post