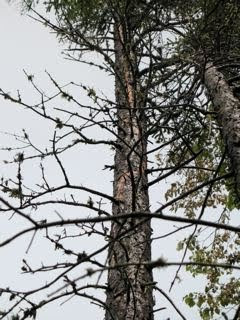 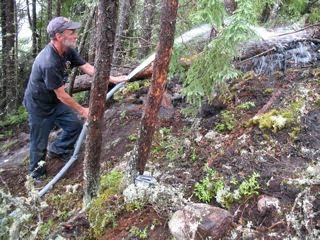 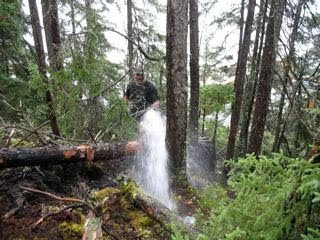 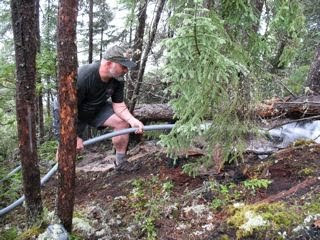 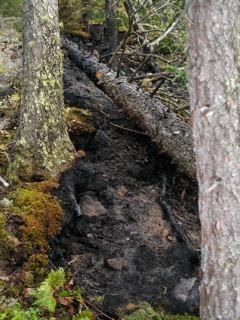 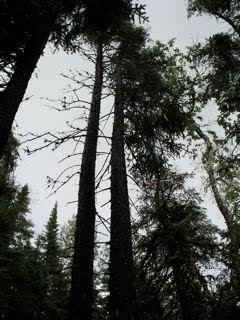 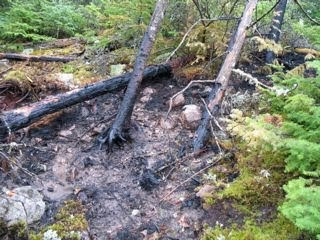 We had an interesting day Wednesday after a thunderstorm went through. The lightning started a very small forest fire about half way up the East shore of Long-time-no-see-um Bay.

It stayed a small fire because of the rain and we were able to put it out ourselves instead of calling in the Water Bombers because our guests Steve and Wendy Leiter reported the fire to us early in it's development. We really appreciate that Wendy & Steve notified us so quickly.

Larry and I put it out with a little over an hour of very heavy watering and digging. The area burned ended up being only about 8 feet wide and 30 feet long.

This fire was started by a lightning strike. If you look closely at the tree pictures you can see the lightning scar meandering down the bark. It does not look like it was a particularly hard lightning strike but it was enough to ignite the very dry humus nestled under the roots and start the tree on fire.

Forest fires are not easy to put out because they go underground. That is why you not only have to put the above ground fire out, you also have to really saturate the soil and dig down to get the water to any "hot spots" under the soil.

We have not had a particularly dry year here but our soil is a humus of rotten wood and some of this humus can stay very dry even during rains if it is protected under roots, fallen trees or rocks. Once it ignites it burns slowly under the ground, sometimes for days and possibly even for weeks before it has the right conditions to come to the surface and take off. This is why discarded cigarettes or unattended camp fires can cause forest fires up here even after the people who unknowingly start them are gone.

We had to undermine the tree that the fire started under to get all of the coals under the ground.

We reported the fire and a fire crew was sent in to make sure it was out by helicopter. They complimented us on how thoroughly we put the fire out. We did dump probably over 10,000 gallons of water on the fire in the hour and a half or so we worked to put the fire out. If you are interested in more information about Forest Fires go to: http://forest.lrc.gov.on.ca/AFFM/fire/interactivemap/firemap_English.htm. We are Wawa 30 if you check the box "out fires".

Well that's enough excitement for the summer, especially Morgan and I guiding the Fire Fighters helicopter to the Burn Site. Now we can get back to just having fun fishing and photographing wildlife.